Thoughts on resilience from New Orleans

Steph and I spent last week in New Orleans. Everything I saw brought to mind thoughts about infrastructure, engineering, and resilience, but perhaps not for the reason you would expect.

Certainly the memory of Hurricane Katrina is strong. Everywhere you go, streets are torn up for projects to keep the city from flooding again. 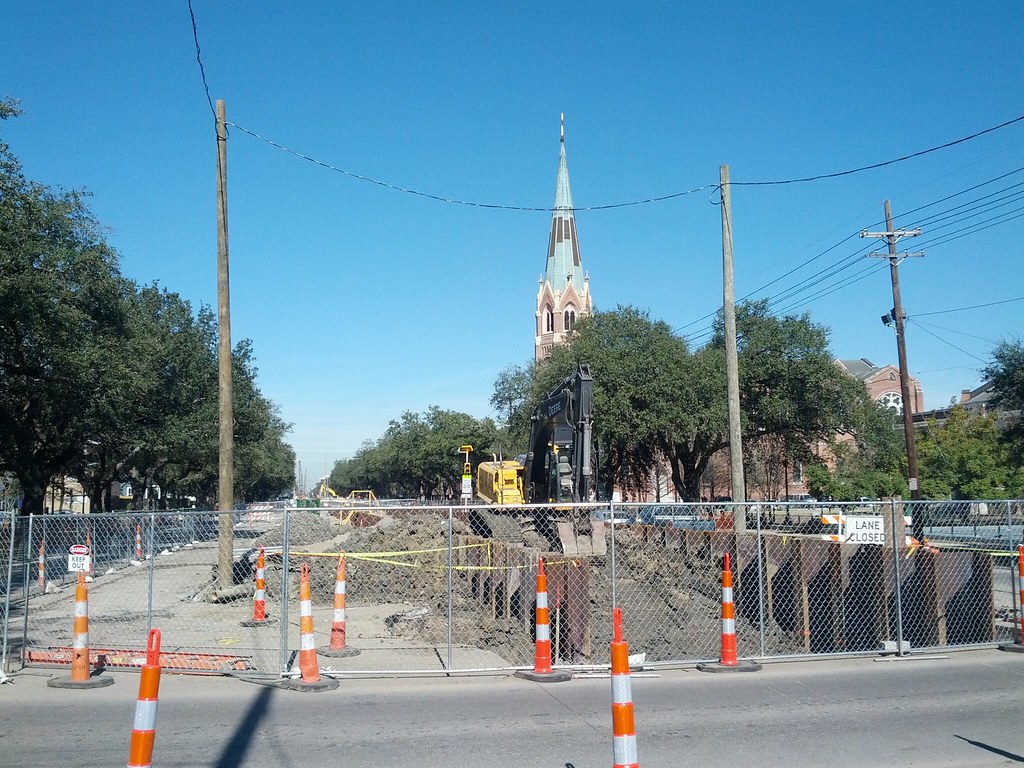 But as important as emergency infrastructure is, there is also an overwhelming sense that the infrastructure that serves citizens every day is essentially unmaintained and crumbling. Even as this public works crew fixes a streetlight, the traffic signal below is missing four of its six visors, and on the opposite corner, behind me, the pole for the signal isn't even standing any more. 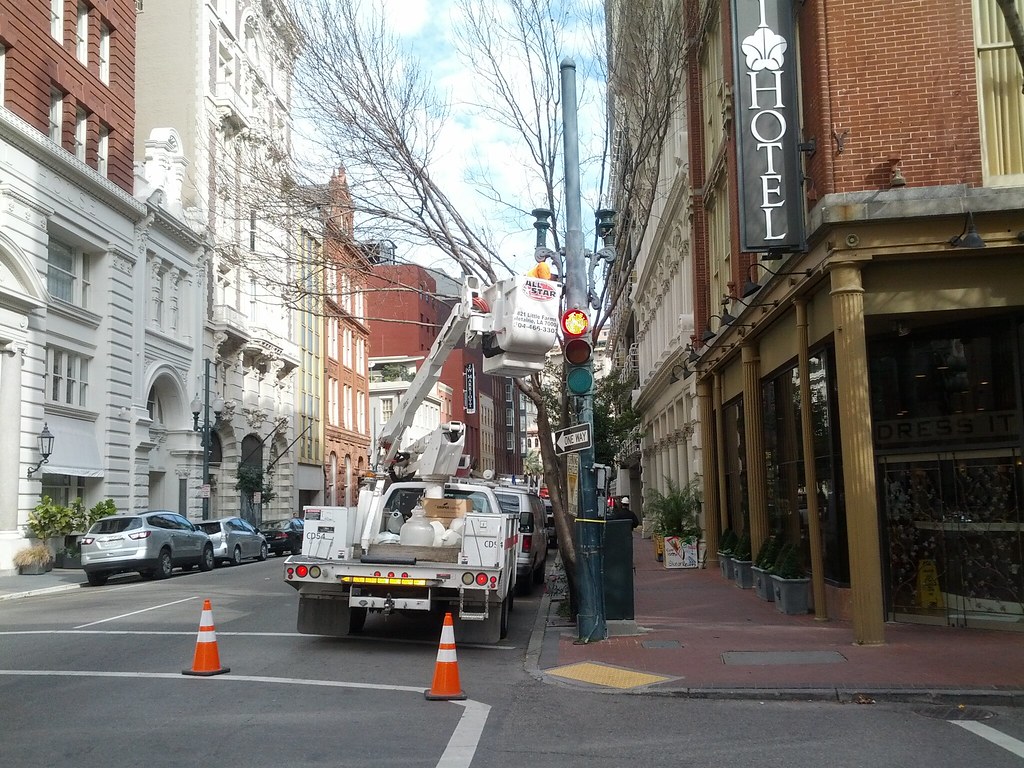 This corner isn't an exception. Nearly every signal in the city is in equally bad shape. Pedestrian signals are especially broken, typically showing nothing at all or both a "walk" person and a "don't walk" red hand at the same time, to the confusion of anyone who tries to pay attention to them. 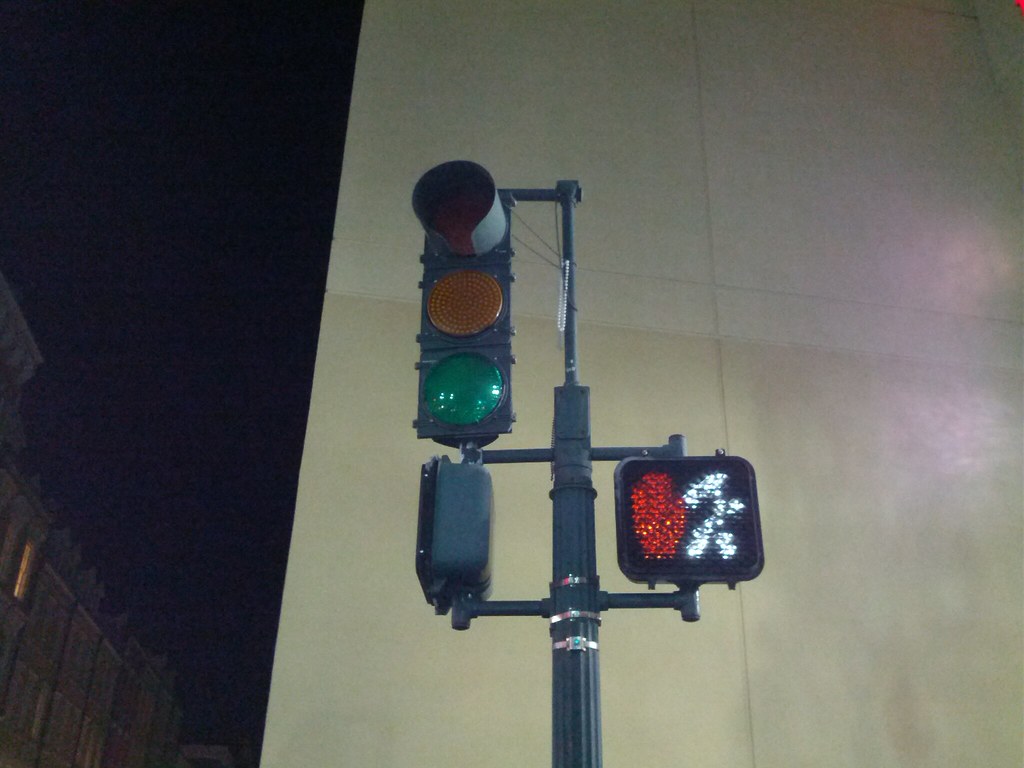 And yet the city continues to work. How?

It works because the city has done essentially no traffic engineering since the 1930s.

I don't mean that every piece of infrastructure is actually that old. Certainly every sign has been replaced since then, and probably every signal has too, and almost every street has been repaved. But their forms and behaviors remain old and simple, so when they aren't maintained, they degrade gracefully instead of catastrophically. 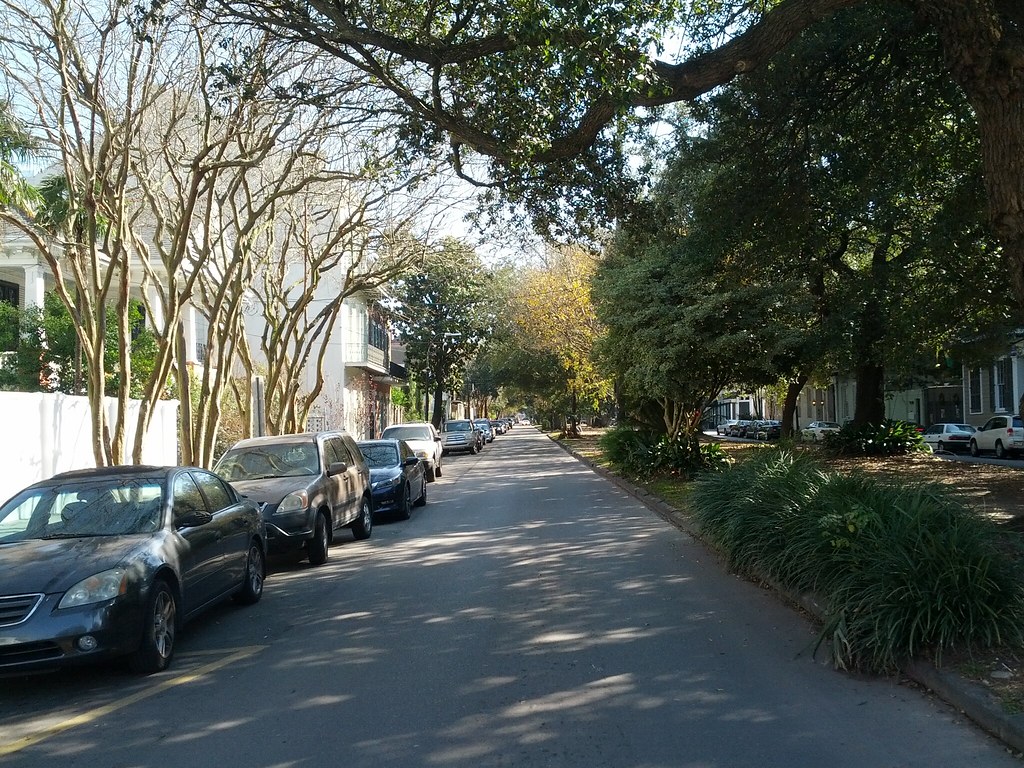 Let me explain. There are two basic forms of streets in old New Orleans: the street and the boulevard. The street has one or two traffic lanes (sometimes one-way) and parking on both sides. The boulevard has a grassy median ("the neutral ground") and one, two, or rarely three traffic lanes, plus parking, on either side. A streetcar may run through the neutral ground.

And that's all. There are no streets with three or more lanes without a median. There are no turn lanes. There is frequently no lane striping. There is no attempt to increase speed or capacity or access or priority or "level of service" or anything else.

There are traffic signals only where a boulevard or an especially busy street meets another boulevard or busy street. Everywhere else, there are two-way stops that give priority to the major street. There are almost no pedestrian signals or turn arrows. There is no need for them, because the signals run on old, simple, mechanical controllers with fixed, 60-second cycles, and if you don't get all the way across a major street, you can wait a short time in the median.

And with this infrastructure, about as simple as it possibly could be, everyone still gets where they are going. 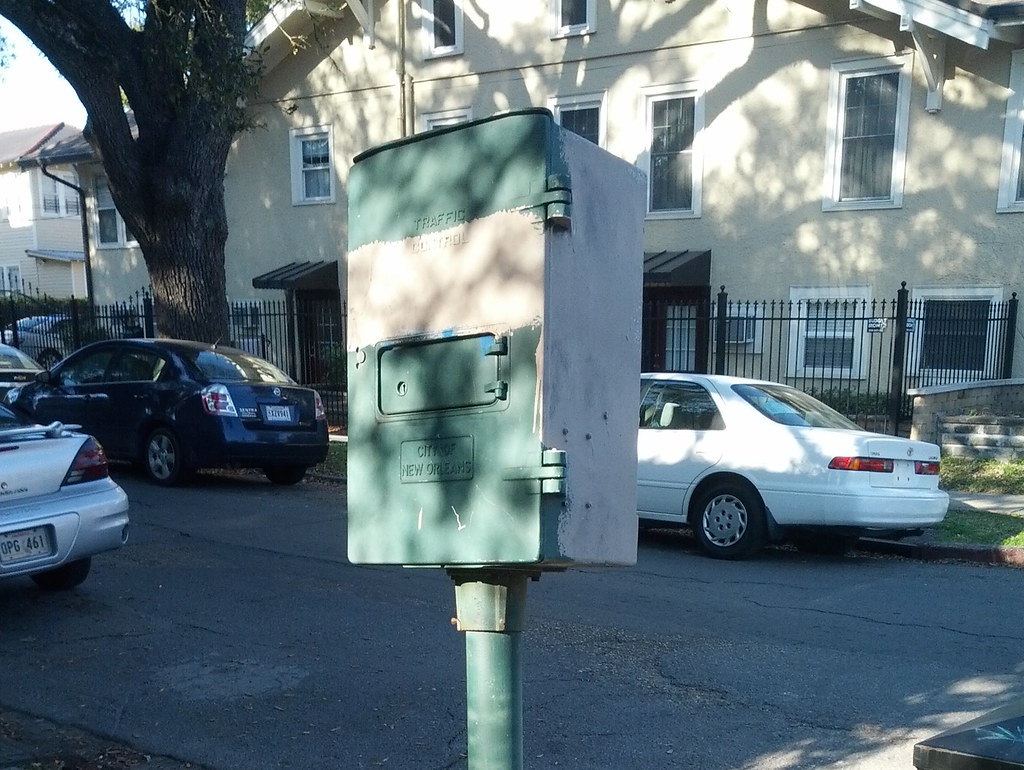 It all changes when you reach the edge of the traditional city, and you can feel the difference. A road with wide lanes, turn lanes, and a double-yellow stripe instead of a large, comfortable median, is not a place where it's pleasant to linger, in spite of all of the signs and markings that are meant to make it better for pedestrians. 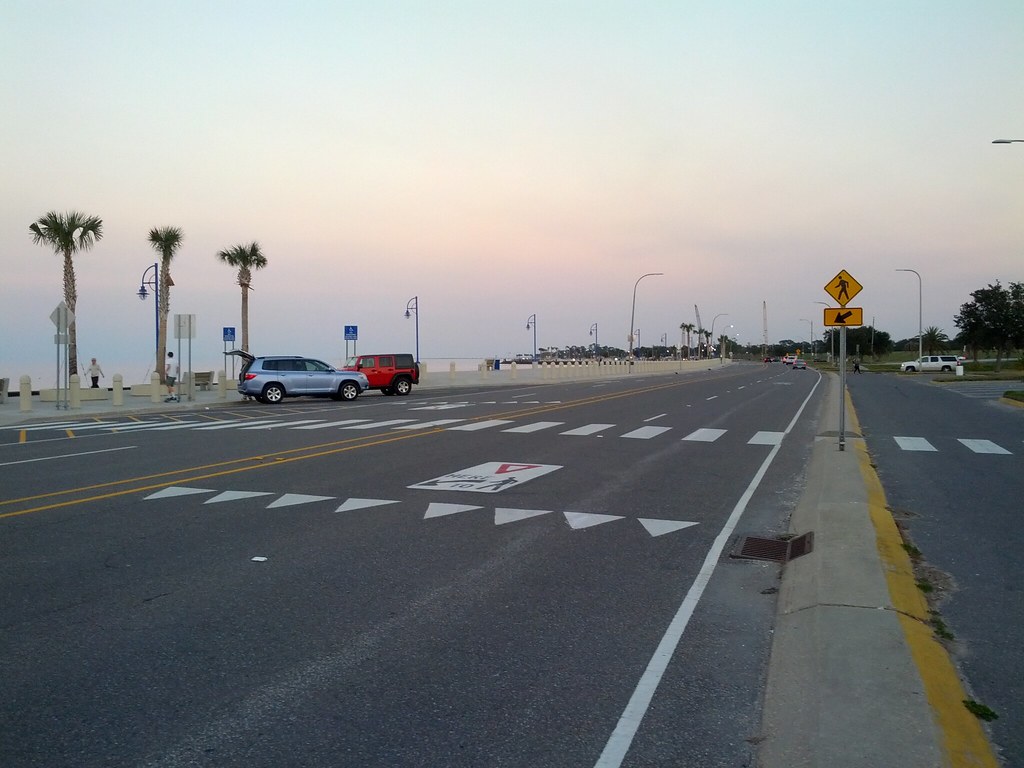 We immediately made our way back to an older neighborhood, where the infrastructure achieves "pride, dignity, and resilience," as the sign below says, by not trying so hard.

Wouldn't it be great if every city made its streets simple and comfortable instead of complicated and fragile? New Orleans proves it can work, and that "dumb" infrastructure will keep on working as other systems around it fail. 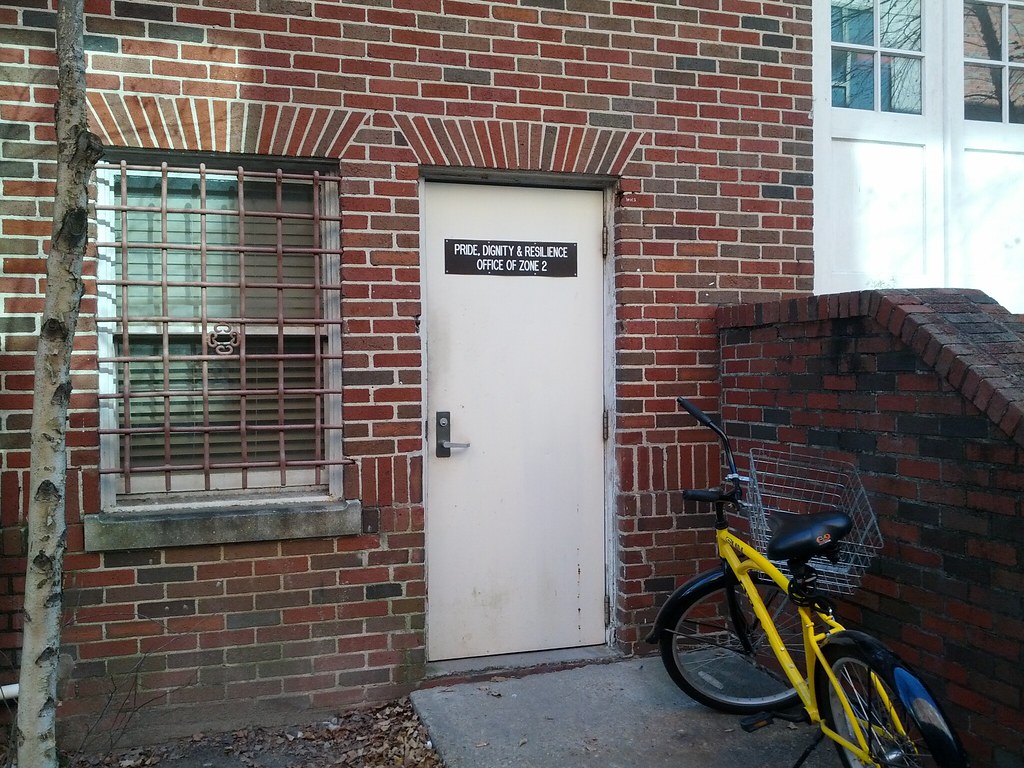 More photos from New Orleans
Posted by Eric Fischer at 10:21 AM

New comments are not allowed.